Hope After Homs: Rebuilding shattered lives on the Syria-Turkey border 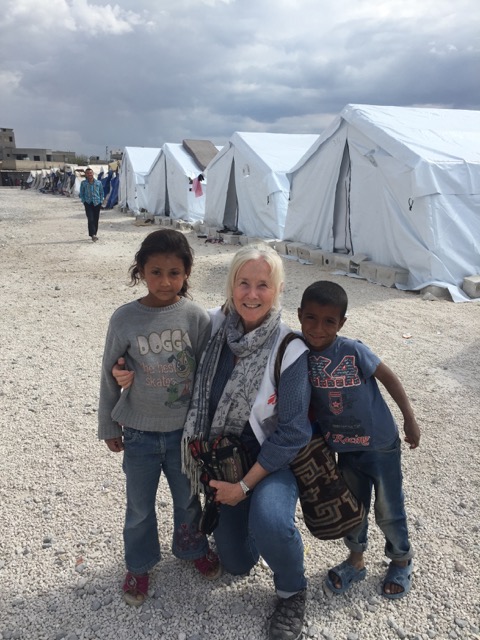 “The wall collapsed on top of us – the children were crying with the pain of a broken hand, a broken leg. But we couldn’t leave the house to go to the hospital. There were snipers on the rooftops shooting at anyone walking outside. So we carried the children in our arms and crowded together into the bathroom, away from any windows, and waited.” Amal’s brown eyes fill with tears as she talks. I put my arm round her.

We are in a refugee transit camp on the Turkish-Syrian border. Amal arrived here with her husband and two young children, Ahmed and Gazal, three weeks ago, crossing the border from Syria in search of safety. Amal is a nurse, and five years ago, at the start of the war, she had a home with her family and a good job in a hospital in Homs. Now her world is reduced to a small tent crowded together with 500 others in a camp in this Turkish border town.

“We were living in the Baba Amr area of Homs, and it was early in the morning when the bombs started falling. There were tanks in the street as well, and snipers – we had to wait until noon before we could leave for the hospital. We splinted the children’s arms and legs with some pieces of wood tied on with scarves. My husband had a broken arm; he had to drive with one arm.”

Amal’s story is one of many. After five years of war, with half the population now displaced from their homes, there are thousands – millions – of stories like hers.

But that doesn’t make hers any less painful. “It was so dangerous. Soldiers would break into houses early in the morning, sometimes kidnapping women and raping them. That happened to one of my neighbours. We didn’t dare go out of the house. I saw one woman fetching her son to bring him home – and I saw him being shot, falling to the ground…” Her eyes well up with tears again, and mine do too. It is so brutal, so tragic. So seemingly never-ending.

“That day of the bombing, we never got to the hospital. We were stopped by soldiers who said if we came from Baba Amr we must be terrorists, and turned us back. And when we got back to the house, it was totally destroyed. We had nothing left. A neighbour told us that it wasn’t safe for us to come back, we should leave.”

So the family left for Deir-Ezzor, a town on the other side of Syria. “There was bombing and shelling there too, and the hospitals were attacked.” She tells me about her work in the emergency department.

“There were so many war-wounded, the most terrible injuries – from gun-shots, from the bombing and shelling.“ As she speaks, her face blanks over. “They brought in a man who was literally cut in half, just joined by his skin – from shelling by a tank.”

I wonder how this young woman – Amal is only 34 – can handle what she has seen. There is worse to come, though. As Amal talks, my Arabic translator gasps and buries her head in her hands. “Every day Islamic State brought people and beheaded them in front of us. Then they hung the heads up in the square. I didn’t want the children to see that. That’s when we finally decided we had to leave. And anyway, it was dangerous for us – they had already imprisoned my husband and my son twice, when they were walking in the street at prayer time…” Amal’s son Ahmed is seven years old.

“We were stopped by the army on the way. They showed me a list of my brothers and sisters, who of course have the same name, saying we were wanted by the regime. I just pretended I was crazy, that I didn’t understand anything they were saying.” She laughs as she says this, and so does the Syrian doctor who has heard what she said. “We have this joke that everyone who comes from Homs is crazy anyway!

“The border was open but we had to pay. We arrived here completely penniless. I managed to keep my phone because I hid it in my son’s pants…” Amal laughs again. Her resilience is astounding.

As we talk, Amal’s five-year-old daughter, Ghazal, plays with a bit of coloured plastic near us. I ask her what she is most missing from the things she has left behind in Syria. “My bear,” she tells me. “She was big – this big…” She lifts her arms high. “She was white and red. And her name was Lulu.” I wonder if I can find another big white and red bear in this small border town.

Although Amal and her husband tried to shield their children from the worst, they are inevitably scarred. Both were injured in the bombing. And Ahmed, Amal tells me, has started wetting the bed. He’s getting support from the psycho-social team here in the camp.

Amal and her family are safe for now. Amal is using her nursing skills again: she has joined our medical team in the small primary healthcare clinic we have opened, together with the municipality, in the camp.

But as we talk I look along the rows of tents, at the dozens of children playing in the gravel: a small one climbing into an empty box from an aid delivery, an older group of boys finding a smooth space to roll marbles. Children who should, would, be in school. Their mothers sit in small groups at the entrance to the tents, just sitting, talking, waiting.

And I wonder: how much longer will they have to exist in this limbo? Amal’s name means “hope” in Arabic. A small glimmer of hope is all they have to cling on to.

This entry was posted in Uncategorized. Bookmark the permalink.

4 Responses to Hope After Homs: Rebuilding shattered lives on the Syria-Turkey border